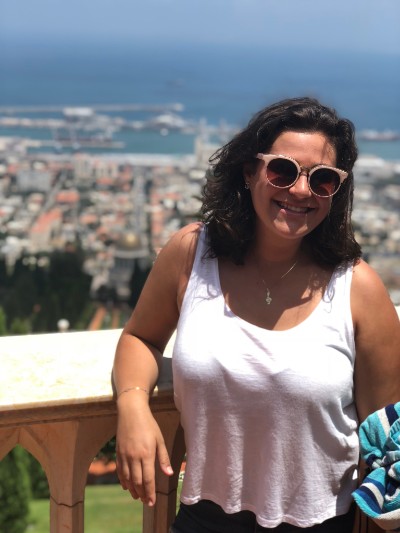 “I recently graduated from Case Western Reserve University with a B.S. in Music Education. Once I return home from Israel, I will be starting a job as a music and choir teacher for middle schooler students in the Chicago area! This summer, I have had the unique opportunity to work with a local street band called Las Piratas Piratas. As an intern for the band, my job has primarily been arranging music. On any given week, I am either compiling full scores, arranging new instrumental parts, writing a vocal arrangement, arranging a mashup, or all of the above. Most recently, I completed a mashup of a traditional song they often perform called Do What You Wanna and I Want You Back by The Jackson 5.  Las Piratas Piratas has been around for several years and they have a set repertoire from which they play. They brought me in because they were looking for ways to refresh their music clean up the organization of their scores.

This internship is a little out of the norm, given the fact that I work for a musical group that rehearses once a week and does not have an office. Luckily, I get to work out of the office of the company Bar-Kayma. The office space is called The Bureau. Bar-Kayma for Culture, Art, Music, and Peace is a non-profit arts management company that “fosters a creative community and encourages utilization of technology, humor and crowdsourcing to form independent and innovative artistic and cultural enterprises” (http://www.barkayma.org). The company collaborates with over 20 arts groups and helps simplify the bureaucracy for them. The Bureau is the perfect space to develop creativity. It is an artistic environment and by nature has a chill vibe. People come to the office to meet with the CEO, Noam, and the Project Manager, Lidia. I am usually on my computer, with earbuds in, and Sibelius or Musescore front and center on the screen. I really appreciate being able to work alongside such driven and creative people.

This past weekend, I joined some of the Las Piratas Piratas band members in some arts and crafts and singing. We gathered at one of the member’s houses and sewed costumes for upcoming performances. Afterwards, I led a rehearsal of two new vocal arrangements that I had created a couple of weeks prior. I love working with this group of people because they are all so fun and friendly. All the members of the band work well together as colleagues and friends to make fun and entertaining music. People from all over Jerusalem enjoy their fun music in the streets and in several different venues around the city.”