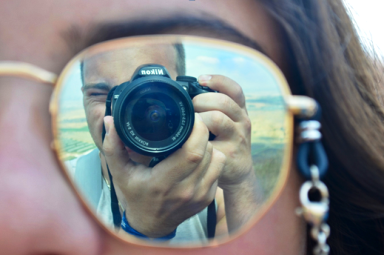 “Growing up on the South Shore of Long Island I was like most of my classmates, Jewish. We were the majority. Throughout my entire life I didn’t have to explain what being Jewish meant to me or how I lived “Jewishly” because we all did – holidays, challah, matzo ball soup, chopped liver, lighting Chanukah candles and of course exchanging gifts, all the typical Jewish-y things.

It wasn’t until I started attending Indiana University where, for many of my new friends, I was their first Jewish friend. This was a startling experience and with all the questions they asked me, I began to feel being the only Jew was a weight on my shoulders. They were so intrigued and eager but, I didn’t feel that I knew enough about Judaism and especially the State of Israel to fill their void – and led me to the realization that I have a void where I should have knowledge!

Like many others, I attended Hebrew school three days a week. I continued this still a little after my bar mitzvah when I didn’t feel a reason to continue my education. None of my friends did, and it was just not a thing anyone put any emphasis on, including my parents. Now, as I continue to explore my Jewish identity, I almost wish that they had.

In December of 2017, I travelled to Poland with a group of Jewish students from across the United States. We were fortunate enough to be accompanied by a Holocaust survivor – none other than Dov Landau, whose experiences were captured in Leon Uris’ film “Exodus.“ It didn’t escape our awareness that we were among the last groups who would have the opportunity to hear the first-hand experience of a witness to the atrocities that took place on that blood-soaked earth…  Together, we visited concentration camps and ghettos, as well as some the last remaining synagogues in Poland that reminded us of what was destroyed and may never be rebuilt due to the dwindling Jewish population there.

After returning from that trip, I felt, for the first time, a deep connection to the Jewish people and a burning desire to look further into my Jewish identity. It was there that I got a taste of the history and a realization that I am a continuation of those who were almost exterminated. I could no longer ignore the void of knowledge or my disconnect from Judaism.

When I began to do the soul-searching that the college experience often arouses, I wanted to find what was the next step in that process. Sitting at home and reading books wasn’t going to do enough, especially since I am a visual learner. Naturally, the first thing that came to mind was Birthright. While deciding on whether or not I should go on Birthright, another opportunity presented itself that I could not pass up: with Onward-IsraeLinks which would allow me to stay in Israel for an additional 8 weeks, go places we didn’t have time to see on Birthright, study Torah in the morning and have time to explore Israel and its culture on my own.

As a photographer, travelling has always piqued my interest so being able to enjoy Israel with some level of independence was really enticing. It was also great to see that I could combine the adventures with an internship that was aligned with my academic and professional goals which I know really is an asset in pursuing any career. After speaking to friends, family, professors and advisors it was clear to me that I couldn’t pass this up.

When searching for Internship, I was provided with a list of several different companies I could work for. It wasn’t until I came across the Israel Forever Foundation that I felt a pull to the organization and I knew I wanted to work there, to learn from the people more about Israel. Working at Israel Forever seemed a great way to achieve that. After speaking with the Executive Director Elana Heideman and hearing the passion that she had for the organization and the great State of Israel, I knew this was the place I wanted to be. I was so drawn in, I found myself visiting the website sometimes even a few times a day and really felt that the Israel Forever Foundation would not only give me the professional skills to enter the workforce but also allow me to expand upon my knowledge of Israel and my Jewish identity.

I can’t lie and say I was all in even after I was signed up – I was still hesitant to come to Israel because of everything I was seeing in the news. I made my way to the airport still anxious but excited nonetheless. Whatever lay ahead, this was a part of my destiny and once I was on the ground, I no longer felt the fear that I felt back in the States.

Was it the distance? Was it the news? Was it the negative way that I kept hearing about others talk about Israel? Was it the constant need to have to “defend” Israel that pushed me further away? I don’t know exactly what, but the difference was clear – so clear that I am now even more inspired and driven to help others understand why this place matters. Because it DOES. It MUST. When we have a better understanding of who we are and what we belong to, every Jew – no matter how disconnected or disillusioned – can find a better part of themselves by exploring both the religion of Judaism and the amazing beauty and meaning of a Jewish State.

Perhaps not everyone will find themselves in Israel. This is another reason why I am pleased to be part of Israel Forever and the efforts to bring Israel to Jews, wherever they are and help them find their own way to connect and enjoy everything Israel has to offer!