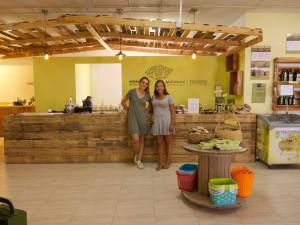 “Sindyanna of Galilee’s introduction video begins with, “In the heart of the Galilee, there is a place where Jews and Arabs live and work side by side.” And as unlikely as this sounds, at Sindyanna, Jews and Arabs not only work side by side, but also interact with each other, learning and teaching about their respective cultures. Sindyanna is a fair-trade, Jewish-Arab women-led nonprofit in the north of Israel that promotes “business for peace” by selling goods produced on revitalized Arab land. Its main product is olive oil, made from the olives grown in groves on Arab land, and it channels all it profits back into the Arab village in which it is based, called Kufr Kanna.

Kufr Kanna is one of two Arab villages in Israel with an “Industrial Zone.” This meant, in Kufr Kanna, two streets of warehouses, large trucks, raw materials, and constant buzzing, drilling, hammering, and shouting. Sindyanna’s olive oil factory is situated on the end of one of those streets, providing an unusual kind of employment for the village: jobs for women.

Because of Sindyanna, many Arab women in Kufr Kanna who had never worked after they got married are now employed and able to contribute to their households’ incomes. Some of them do not even have to leave their homes: the traditional woven baskets Sindyanna sells can be produced by both Arab and Jewish women in the comfort of their own kitchens. Many of the women I met, though, enjoyed working in the Visitors Center. They told me it was nice to be able to leave their homes and socialize with other people, especially after their children had all grown up. Not all the women who worked at Sindyanna were older, though. During my time interning, Sindyanna’s managers interviewed many young women, with the goal of helping them save money for a higher education and showing them how they did not have to just get married and stay at home for the rest of their lives.
My boss works eight-hour days managing the Visitors Center, switching back and forth between Hebrew, Arabic, and English, and still must come home and take care of her four children. But Sindyanna continues its work breaking stereotypes, showing Kufr Kanna the power of women and slowly (hopefully) changing Arab culture to accept women who earn income for their families, and increasing the quality of life for Arab Israeli communities along the way.

I’ve studied statistics on women’s empowerment, read articles about women controlling their families’ incomes, and I’m a proud feminist. I always knew how important women’s empowerment was, especially women’s economic empowerment. I knew how much better off low-income families became when the mothers found jobs or took control of the money. Working at Sindyanna, interviewing the women who worked there, hearing how their lives had been positively enhanced by the organization, and talking to the businesswomen who were trained at the other nonprofit I interned at for this summer, made me truly understand the essentialness of women’s economic empowerment. The world can only change for the better when all people are given equal opportunity to be self-sufficient and shape their own lives. It sounds cliché, I know, but being surrounded by powerful, strong-minded women all summer, I truly believe women’s economic empowerment will ensure (as much as possible) a sustainable future.”