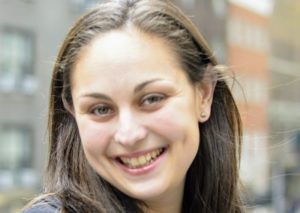 Jessica was born in raised in New Jersey. Throughout her youth, she attended and worked at Ramah movement summer camps and was involved in United Synagogue Youth (USY). During college, she had the opportunity to study abroad in two incredible cities, London England and Haifa Israel, which helped shape her interest in giving young people the opportunity to have immersive abroad experiences.

After graduating from Boston University with a B.A. in International Relations in 2008, she started work at the Jewish National Fund (JNF). Jessica served in multiple roles at JNF including in the Israel Advocacy and Education department and later in the Greater New York region as an events manager. In 2013, she completed her Masters Degree in Public Administration with a focus in Nonprofit Administration from Baruch College of the City of New York. She had the opportunity to participate in Germany Close Up and is currently a Birthright Israel Fellow.

Having been involved with Onward Israel since its inaugural year, Jessica proudly serves as the Onward Israel North American Director. She lives in New York City where she is an avid Yankees fan and loves to explore the city for different types ethnic foods.