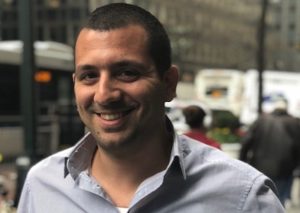 Eliran is married to Maayan and father to Or-Yosef. From a very young age Eliran was active in social organizations as both participant and staff. Eliran served as a fighter and commander in the Israeli navy. After this he was a Shaliach in US, before returning to Israel to continue his career. In the last few years he was a Director of Programs in diverse projects such as ‘Taglit’, ‘Masa Israel’, and more.

His academic career includes a B.A degree in Political Science and Public Communication. Currently he is completing his Master’s degree in the Studies of American Jewry. During his years as a student, Eliran participated in a number of significant leadership programs such as The Stand With Us Fellowship, The Jewish Statesmanship Center and the program for educators for Jewish Peoplehood in Beit H’atfutzot.

Among other endeavors, Eliran lived in and managed the Tel Aviv ‘Moishe-House’ extension. In addition, Eliran founded and manages his own company ‘Kelim Shluvim’ that specializes in the development and management of training skills for diverse audiences. Eliran is a big fan of sports and music of any kind.