Jared Witt is a senior at Miami University studying marketing with a co-major in business analytics, and is currently participating in the Onward Israel program.  Jared will spend the next two months working as an intern at an Israeli startup, Tryna Grub, in Tel Aviv. In these two blogs, he shares his experiences from the past week.

I always thought I knew hummus. My Jewish roots had properly prepared me for any and all conversation about the spread. I was one of the earliest adopters of this chickpea mush when it touched down in the states and thrust itself into the mainstream. Today’s lunch experience proved to me that I only understand the basic American version of hummus.

Jered brought me to Hummus Mashawsha, which the CEO described as the best hummus in the Holy Land. I sat down thinking, “It’s hummus… how much better can one be than the other.” The boss’ bold claim surpassed my wildest expectations. If you have never had real Israeli hummus, I weep for you. The hummus at Mashawsha is full of a rich, almost nutty, flavor from the chickpeas that is complemented by a drizzle of olive oil. Jered told me if I wanted the full experience, that ordering the hummus with sautéed mushrooms was a must. Turns out my boss possess a vast amount of knowledge when it comes to a bootstrapped startup on top of a rich understanding of great hummus.

My hummus plate arrived at the table and it looked like the hummus that I was used to in the states. I ripped a piece of pita from the table, and dipped the Mediterranean bread into the bowl of mashed chickpea goodness and with a circular flick of the wrist type motion, I loaded the bread with the hummus and popped it in my mouth.

The flavor is incomparable. True hummus is made fresh daily with no preservatives unlike its American counterpart. That fact alone sets it miles about any hummus I had ever tried, but the flavor was so rich, and perfected by the sautéed mushrooms that I could hardly believe it. Beforehand, I did not understand how only hummus and pita could make a full meal. I did not think it possible that a dish, traditionally likened to an appetizer or side would be able to fulfill my never-ending hunger. After finishing about half of my bowl I was nearly in a food coma.

My first true hummus experience was phenomenal. I am now a huge proponent of my boss’ opinion that Hummus Mashawsha has the best hummus in the middle east let alone Israel. This food has come a long way. Ten years ago, I had never heard of hummus and now it has thrust itself into the mainstream as a vegan’s sweet dream as well as into my top food categories.

Pro tip:
If you are feeling particularly adventurous or are counting your carbs, replace the pita with a large slice of onion.

Getting the team together (almost)​

Today was a very exciting day for the tryna grub team. Tatiana, the third and final intern had her first day, ceo jered gave a phenomenal presentation at the Heseg House resulting in the signing up of twenty new potential campus ambassadors, and we finally got some groovy t-shirts. 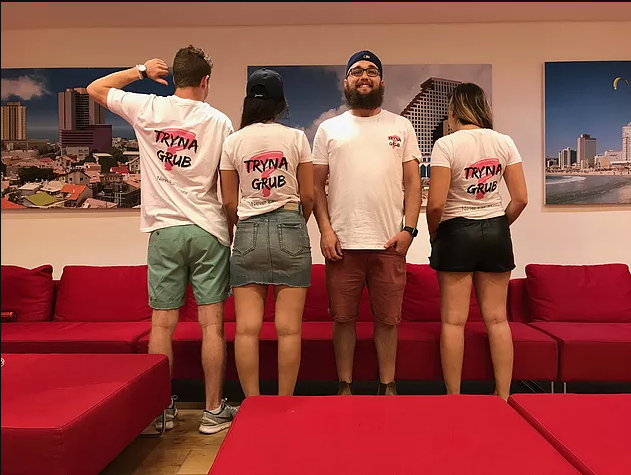 Number of Onward Israel participants in its most recent cohort in 2022.