Welcome back! As you may have guessed, the Cincinnati group has been very busy in Tel Aviv since the last blog post. Some of our recent activities include touring the Old City of Jerusalem, getting to know other Americans interning in Israel, jelly-fishing at the beach (any Spongebob fans?), and as always, exploring new cuisines.

When the last blog was posted, my fellow interns and I had just completed our first day of work; we are now finishing our second full week! To give a better sense of what our group accomplishes on a day-to-day basis, a different intern will be featured on each week’s blog post. This week, Ilana Frankel will share the beginning of her journey as a Marketing Intern at First Impression.

In her first two weeks at First Impression, an advertising startup that helps websites monetize their traffic by finding supplemental ad placements on their pages, Ilana has already become an integral part of the company.
During the first week of her internship, Ilana focused mainly on researching her company’s product and the digital advertising industry. Once she had a firm grasp on the business side of her company, she took on responsibilities such as creating surveys for existing customers, launching email campaigns for potential clients, writing blog posts, and giving feedback on sales calls.

Ilana also actively participates in various aspects of the company’s cultures. For example, she regularly attends company lunches where she learns about the lives of her coworkers who have made Aliyah. Additionally, Ilana enjoys that there are two other American interns at her internship; it allows for smoother transitions as all the interns learn together. She is looking forward to the next six weeks of her internship at First Impression! 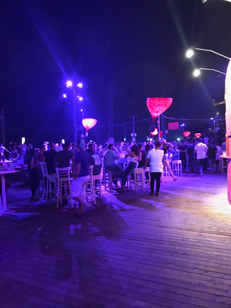 Right: Clara Club, a famous nightspot by the beach in Tel Aviv.

Although everyone has been appreciating our work-related activities, we have also been enjoying our “extracurricular activities” as well. This past weekend, our group took a trip to Clara Club for an event hosted exclusively for American interns in Israel. At the event, we spent time meeting (and playing Jewish geography with) other interns working in exciting locations around Israel. Many of us also connected with friends from our respective camps, universities, etc. who are participating in programs other than Onward Cincinnati.

The group’s extracurricular activities also include seeking out fun areas for nightlife in Tel Aviv; our newest discovery is a karaoke bar just a short walk from our apartments. Just the other day, Walker Lewis and David Muskal performed their favorite song, Breaking Free from High School Musical!

Another important component of our program is the biweekly seminar program coordinated by BINA. For this week’s seminar, we ventured to Jerusalem to learn about its complex makeup, including the issues related to different ethnic groups, genders, and cultures all within the holy city. After touring the Old City and taking a quick trip to the Kotel, we traveled to Hebrew Union College for continued learning. There, we learned from an organization called ‘Women of the Wall’ and about an issue that was unfamiliar to most of us: the complications of marriage in Israel. 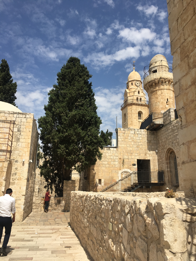 Left: A view from our tour of the Old City in Jerusalem. 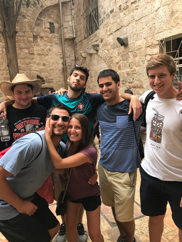 Additionally, we visited New Spirit, an organization aimed at keeping young people in Jerusalem and connecting them to form sustainable communities. We toured one its hubs, a cultural center home to a myriad of aspiring artists, and learned about the diverse groups of people who use the space. Furthermore, we participated in a Thinking Lab to brainstorm ideas of how to bring the positive change that New Spirit emphasizes back to our own communities.

After an educational day in Jerusalem, many of us headed to another one of our favorite spots: The Malabia in Jaffa. The Malabia is a casual spot where we hang out, play board games, and eat Malabi, a traditional Israeli dessert similar to custard 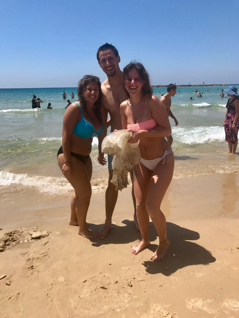 served with a variety of toppings. Finally, we ended the week with yet another trip to the beach. While we did spend time relaxing, we also took up a new hobby; jelly-fishing! This (extremely sophisticated) game consists of walking along the beach hunting for washed up jellyfish, where whoever finds the biggest one is declared the winner. Rumor has it that jelly-fishing will be featured in the next Olympics… you’ll have to read my next blog post to find out!

Left: Talia Warm, Dan Ginsburg, and Andrea Goldstein pose with the winning jellyfish of the day.

Number of Onward Israel participants in its most recent cohort in 2022.